If it wasn’t for the word “scary” in the title, you might mistake this post for a telco ad that promises you better things to come with a RM33 Mobile Eleganzaaa Plan or whatever. Unfortunately, this isn’t an ad for a telco. In fact, if the “promises” made in this post become true, your internet surfing experience may become much, much worse. When the CMA was first introduced, one of the major promises made was that the internet will not be censored; but seventeen years on, we’ve seen that this wasn’t really the case. The first signs of this was in 2008, where the MCMC started to block sites that “contained either pornography or malicious content or infringed copyrights” and later, as some of us might be familiar with, news and political sites like The Malaysian Insider and Sarawak Report.

But y’know… all things considered we still aren’t doing too badly. It’s not like Malaysian websites has to register with the government or anything like tha- OH WAIT. Yeahhh… the MCMC has proposed a bunch of new amendments (fancy word for “changes”) to the CMA, which will be discussed and quite possibly passed in the upcoming Parliament meet on May 16th. And what awesome new improvements can we expect? Well, nobody knows, because despite how it’ll affect more than 20 million Malaysians, the MCMC has been keeping pretty quiet on what these amendments will bring.

We’ll go more into this at the end of the article, but for now, what we DO have are notes taken by people who attended discussion groups with the MCMC on the amendments. So based on these notes, what has been officially announced (which is not much), and a chat with Jac Kee, co-director of the Centre for Independent Journalism (CIJ); we’re listing down five of the scariest possible changes Malaysian netizens can look forward to, starting with… Right now, if you were to get in trouble under Section 233 of the CMA for creating or distributing (which includes sharing) something that’s false or indecent for bad purposes, you’re liable to be fined up to RM50,000 and/or be thrown in prison for up to a year, with an additional fine of RM1,000 per day that the offending post stays up.

The amendment will increase that initial fine to RM500,000 (that’s one extra zero) and RM100,000 (two extra zeroes) per day that the post stays up. Not just that, Jac tells us that they’re considering the removal of the bad purposes part, meaning that if you do get arrested, the court won’t need to prove that you had shared the article with bad intentions, just the fact that you SHARED it.

Screencapped from Section 233 of the CMA. Click for full size.

Also, there’s a chance that the MCMC will be allowed to give out preventive instructions to organizations like your internet provider or telco to stop something before it happens. For example, they can block a site that might post something damaging to the country, even if the site hasn’t published it yet. It’s kinda like the Minority Report movie, except without people who can actually see the future.

Chance of this happening: Very likely

Back in February this year, Deputy Communications and Multimedia Minister Datuk Jailani Johari confirmed that the MCMC was looking into increasing the initial fine to RM500,000.

There’s some good news to this though… the initial plan was for the fine to be RM 1 million (that’s a lotta zeroes), and there doesn’t seem to be any increase on the one-year prison sentence. Yay! Many people kinda have the opinion that our local newspapers can be biased or unfair when it comes to reporting. This is mostly blamed on Ops Lalang, which happened waaaaay back in 1987. We wrote an article about it, but long story short, a bunch of people kena ISA, The Star and Sin Chew Jit Poh got closed down, and a new law was passed to require all printed media to have a license.

The license had to be renewed on a yearly basis, and can be revoked if the newspaper or magazine published something that went against government guidelines – leading to a self-censorship in the media. This was one of the main reasons many readers gravitated towards online news portals, which didn’t have such requirements. 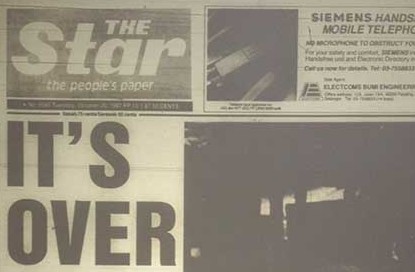 In 2013, the MDA – Singapore’s version of the MCMC – passed a “licensing scheme“ for sites that:

In order to get (and keep) their license, sites will have to post a bond (aka “guarantee”) of S$50,000 and remove content within 24 hours when asked to by the MDA. Licenses will be renewed on a yearly basis.

In February, Malaysia and Singapore signed a memorandum of understanding for information and communications stuff. And guess what? There’s been speculation that the Singaporean model would be used as a reference for MCMC’s version, but until the proposal’s presented in parliament we won’t know what the details will be, or how wide the scope will be extended – to include video bloggers and YouTubers, for example.

Chance of this happening: Very likely

This detail was confirmed by deputy Home Minister Nur Jazlan Mohamed, so there’s a pretty high chance the proposed amendment is gonna include some sort of registration program.

3. They can block your site and denda you faster! One problem with the current website blocks is that the site owners often find themselves blocked without any reason or warning. You’d basically wake up one day and see the dreaded “MAKLUMAN” banner blocking all access to the site. Well, it’s actually been argued that the CMA doesn’t actually allow the MCMC to block a site in the first place!

The discussion group notes mention that to solve this grey area, the upcoming amendment will give the MCMC not one, but three different types of blocking powers:

The notes also mention that another of the MCMC’s suggestions is to set up a special court for communication and multimedia-related crimes in order to settle cases as fast as possible. However this suggestion is for service providers, so regular users like you and me might still have to wait for our turn to show up in court.

Chance of this happening: Likely

Since the MCMC is already blocking sites with the current CMA grey area, it’s quite likely that they’ll just make it official.

4. They might be keeping an eye on what you surf Click to read the ways our Gomen can block websites!

Going through the discussion group document, we found a small note that mentioning how Internet Service Providers (ISP) will be tasked with keeping records of their users. This might be based off an earlier proposal in 2003, when the MCMC held a discussion group to look into the possibility of ISPs keeping detailed (but anonymous) records of user surfing habits for assessment and market research purposes.

But of course, there were concerns about violating rights to privacy, something that was also brought up in the recent discussion group:

“When asked whether they will track user’s surfing records, they did not say no but did say they will respect individual’s privacy and in line with international laws.”

Chance of this happening: We don’t know

The issue of internet privacy in Malaysia has been questioned after it was revealed that the government made at least two purchases of some highly advanced spying software – FinFisher and Remote Control System. This is also in addition to the fact that our privacy laws are said to favor the government more than the citizen, something that you can read more about here. Have ugaiz ever wondered why shows like Game of Thones are censored on Astro but not on Netflix?

Well, it’s because Astro kinda functions like a high-tech TV station, meaning that they require a license from the Malaysian government in order to operate. Of course this also means that they have content regulations and guidelines to follow.

In comparison, services like Netflix are called Over-The-Top (OTT) services, meaning that they’re more like the middlemen between you and the company that made the show. Whether you get to watch a show or not depends only on whether Netflix is able to get the rights to air them. This also means that they have a lot more leeway because traditional broadcasting licenses don’t apply to them.

However, this might change because the CMA amendment intends to “level the playing field” by introducing new parts that will consider foreign websites and OTT services as “deemed licensees” – meaning that they have to follow the same rules and regulations that licensed companies such as Astro do. Companies that don’t comply will be considered illegal and blocked or prevented from taking Malaysian subscribers.

Jac mentioned that this OTT regulation may also include YouTube, especially since they’ve introduced a subscription service called YouTube Red which is only available in the US (for now).

Chance of this happening: Not sure

Since there’ll definitely be an economic impact from this, the MCMC also conducted a discussion group with more than 350 corporations such as Google and Yahoo. Maybe they might decide to level the playing field the other way, by allowing Astro’s Tribe OTT service to air uncensored content? 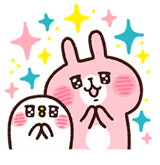 We can only hope. Image from Facebookstickers.

Wah this sounds quite serious. How come I didn’t know about it? Well, we first gotta say again that most of these proposed changes you’ve read are based off an unverified document that we can’t even show you. There’s a chance that the actual proposal presented in Parliament might be very different. But it’s not bad researching on our part. The reason why we had to use an unverified source is because the MCMC hasn’t revealed any results of their discussions, or specific details on the amendments.

And that’s the real problem.

There are currently over 20 million Malaysians connected to the internet, and as much as some of us might hate to admit it, a significant portion of our lives are spent online. Heck, some of us might even depend on the internet for a living – blogging, running online businesses, or pretending to be journalists on CILISOS.

So in this sense, shouldn’t there have been more efforts made to get the public’s opinion on these new improvements to the CMA? Or at the very least to inform us? When we checked with Jac, she says that in both discussions that the MCMC held last year, no public-interest NGOs that they worked with were involved – including those from NetMerdeka coalition. We know corporations managed to air their concerns, but who voiced the concerns of the Malaysian public? Original image from Leadegroot via Pintrest.

This is kinda pure speculation (which we won’t get in trouble for… yet), but there’s a possibility that the government learned their lesson from an earlier attempt in 2008 to get political bloggers registered. The announcement caused such a wide protest from citizens and NGOs that they had to abandon the idea. So with attempt #2, well…. we’ll let you fill in the blanks yourselves.

If you’re concerned about the upcoming amendments, you can still try writing to your MP to get them to vote against it (Here’s a guide to do it) or visit NetMerdeka for more discussions on internet freedom.

But perhaps more importantly, we need to push the government for more transparent public discussions in order to not be left in the dark – whether it’s about CMA amendments or any new laws they might come up with in the future. Getting in touch with CIJ (Jac’s organization) is a good way to start.

Net Merdeka is a coalition of civil society organisations advocating for freedom of expression and the media.